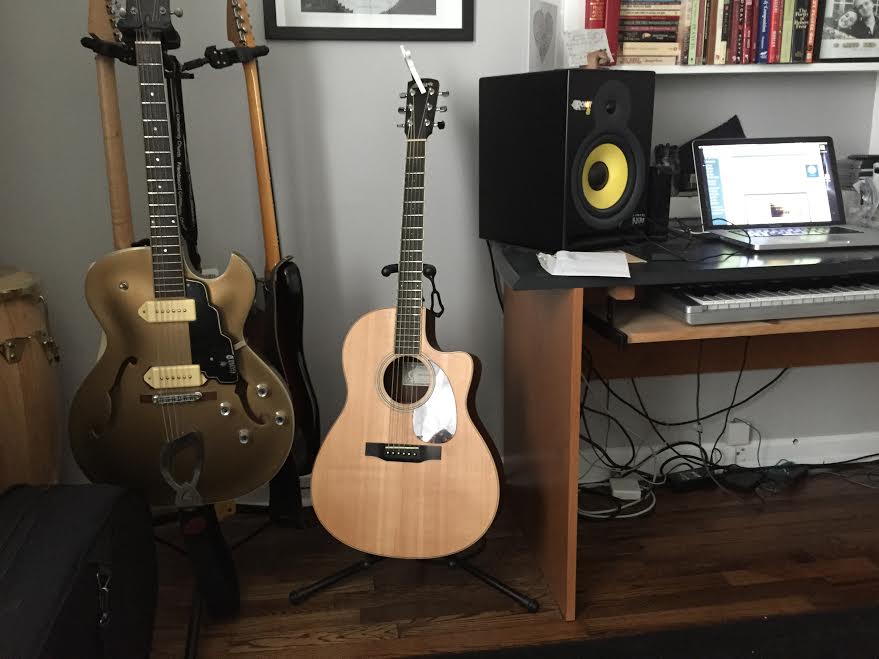 I have a confession to make.  I have been about 80% done recording my new album…for at least 4 months. I had intended to release a new set of songs in the early fall of last year, but it’s still sitting on my hard drive, most of the way completed.  The songs are pretty much all written.  Most of the instruments have already been recorded.  A couple of the songs even have vocals on them already, but they’re not finished yet.

2014 was both a rewarding and a challenging year.  My wife and I have settled into our new house in south Nashville.  It’s small, about 1,000 square feet, but with the help of friends to remodel and Hannah’s eye for decorating, we love calling it home.  God has given us a space to call our own, to create, to show others hospitality, to escape.  Our house has been a refuge in a year full of big transition, traveling, and intense creative work.

As my voice started to recover, other projects started filling up my desk.  My friends are some of the most talented people I know, and I spent the latter part of the year producing and mixing several albums for other people.  It’s been a nice break from the pressure of working on my own stuff.  I love taking other people’s songs and finding a way to bring out the best in them.

Most of that work is done now, and I’m just about ready finish that last 20% of recording.  My voice is a little rusty.  There’s still some extra tension in my vocal cords that makes me nervous to sing, but I’m doing my best to exercise it a little each day.  For the most part, it feels better and stronger each week.

Beyond that, I have to confess that I’m just a little bit nervous about this album.  I love the songs.  I love the production.  I’m pretty sure my voice is going to be just fine, and all the vocals will sound good on the final mix.  But I’m still nervous.

Every time I set out to record a new record, I want to improve on the last one.  With blank pages in front of me, I always wonder how I’m going to write 10 or so new songs as good as the last 10 or so.  The Way You Love and before that Hope are two of my proudest creative moments.  Those two albums turned out better than I could have ever hoped for.  Every new record feels a bit like starting over from scratch– no guarantees but endless possibility.

So much of being a professional artist, of any kind, is constantly putting yourself out there for evaluation.  It’s hard not to feel the pressure of whether or not people will like what you do.  Beyond that, I’m turning 30 in a few weeks, and I’m finding myself hyper-aware of which goals I’ve already accomplished and which ones seem as far away as ever.  As I begin putting the finishing touches on this new album, my emotions continually swing from excitement to jittery nervousness.

At the end of the day, I know that God has given me a new set of songs that I feel are important.  I’m doing my best to surrender the outcome to Him.  He is the one who sets our paths, and I must do my best to follow in it.  Frankly, I have no idea where God’s path is leading.  So far, He hasn’t disappointed. God’s plans always turn out better than my own.

So, with all of that said, I’d like to ask you to be in prayer for me over the next couple of months.  Pray for my voice to be strong.  Pray for my mind to be clear and creative.  Pray for doors to open so that I can share these songs with others.  But most of all, pray for me to grow in my faith.  I want to be surrendered to what God has assigned to me, whatever that may look like.