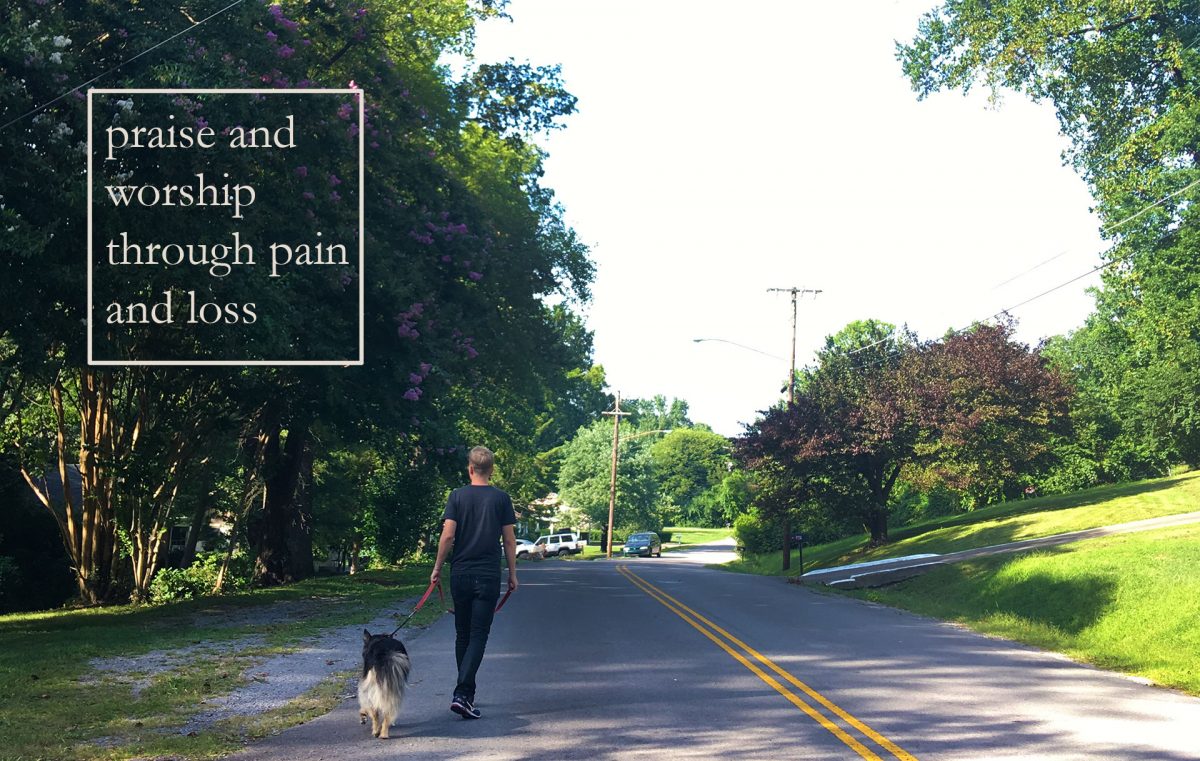 This past weekend, Hannah and I said goodbye to our precious border collie/german shepherd mix Esther. I got Esther eight years ago when I desperately needed a friend, and she was that and so much more. She was one of the smartest, kindest, and happiest animals I have ever been around. Because Hannah and I both work from home when we’re not traveling, Esther was a part of nearly every routine of the day. Two weeks ago, Hannah and I grew concerned because Esther’s bright and energetic personality changed overnight. Our normally cheerful friend was sad and subdued. On Wednesday, after a week and a half of ups and downs, we took her to the vet, but the vet was unable to find any physical symptoms. He checked her thoroughly, and all her vitals were strong, her eyes were clear, and she didn’t appear to be in any danger. So we went home with a mild pain medication, thinking perhaps she was sore from tweaking a muscle in her back or hips.

Thursday evening, we attended a connect group from our church, and when we arrived home, Esther hadn’t moved from the spot where she was when we left, and she could barely walk when I let her outside. We planned to take her back to the vet first thing in the morning, and I spent much of the night sleeping next to her on the floor. Around 3:30am, she had a massive seizure. Later, the vet told me most dog seizures last 20-30 seconds, but this lasted 3-4 minutes, the most intense physical exertion I had ever seen this athletic dog ever have. I thought that at any moment that her heart might stop. As soon as it was over, we rushed her to the emergency veterinary clinic, and the staff told us she most likely had an aggressive brain tumor. Best case scenario, they said, we were merely buying time before she had another seizure, likely even worse than the first. With the rapid onset of her symptoms, our options were very limited, and we decided to take her home and spend our last day with her here.

Hannah and I made Esther as comfortable as we could, despite the fact that she was in great distress after the seizure. She paced frantically, stumbling with nearly every step, until she was too exhausted to stand any longer. Then she slept for several hours until she was strong enough to repeat the process. We loved her as best we knew how and took her on as many walks and as many trips outside as she wanted to go on, helping her stand upright, going as slow as she needed to go. We petted her and hugged her as many times as the day allowed, and we fed her all her favorite things for dinner: strawberries, ham, peanut butter, and Cheeze-Its.  Esther died very quietly as the sun was setting.

The last three days have been some of the most painful and empty Hannah and I have spent together. Our eyes are sore and our bodies are exhausted from crying. Our house is dreadfully quiet, and everywhere we turn, in every space of our home, there are memories of our friend. Our hearts are smashed.

Esther was my first dog, and in eight years with her, I experienced so much of God’s love, joy, and presence. Our walks around the neighborhood were always prime time for God to speak to me. So many of my testimonies feature Esther in a supporting role at some point in the story. The emotions and attachment that we feel towards animals are God-given. When the prophet Nathan rebuked King David in 2 Samuel 12, he used the love of a pet to pull David’s heart strings. David’s son Solomon wrote in Proverbs 12 that how we care for our animals is a measure of righteousness. That bond is a powerful thing, and it’s a reflection of God’s heart for His creation.

Sunday morning, Hannah and I led worship for a congregation just outside of Nashville, and it was excruciating. We did our very best to pour out to God what He is worthy of, even though our hearts are so full of questions. In the evening, I was scheduled to volunteer for the very first time with the middle school students at our home church The Belonging Co.. I told Hannah that I wanted to follow through with serving, but I was nervous about the first part of the worship service because our church usually begins every gathering with joyful celebration. There is typically a lot of dancing and a lot of joyful shouting, neither of which were things I felt able to do.  Upon arrival, the youth leader announced that the message of the day was “Praise is a Weapon,” and we were going to lead the students in a big dance-praise party at the end of the service. Had I known beforehand, I probably wouldn’t have shown up.

But I danced. And I praised. And I worshiped, giving God everything I knew how to give Him. Truthfully, it seemed dishonest and insincere to lead in something I felt like I had no business doing, but I was mindful of an old saying: “Feelings make excellent servants but terrible masters.” I thought of King Jehoshaphat’s armies who put their worshippers on the front lines. Surely they also felt insincere and dishonest. How could they have known the battle that God was fighting on their behalf when they were participating in something that seemed like madness at best and suicide at worst? Yet they worshiped, and we have their testimony to gain from.

It has been a very long time since I worshiped God without feeling His presence. Most of the time, it’s easy to see that the economics of worship work entirely in our favor because we gain so much more from God’s presence than we could ever bring to Him. Right now, however, worship feels costly for me and Hannah, and I am reminded that King David said, “I will not give a burnt offering that cost me nothing.” We are giving everything we know how to give, doing our best to whole-heartedly and beautifully finish the tasks that God has assigned us. Hannah continues to paint and prepare a collection of artwork that will be on display this weekend, and I am continuing to sing and to write.

18 For I consider that the sufferings of this present time are not worth comparing with the glory that is going to be revealed to us. 19 For the creation eagerly waits with anticipation for God’s sons to be revealed. 20 For the creation was subjected to futility—not willingly, but because of Him who subjected it—in the hope 21 that the creation itself will also be set free from the bondage of corruption into the glorious freedom of God’s children. 22 For we know that the whole creation has been groaning together with labor pains until now. 23 And not only that, but we ourselves who have the Spirit as the first fruits—we also groan within ourselves, eagerly waiting for adoption, the redemption of our bodies.

At the end of the day, I know that we are rapidly headed towards a day when perfect is coming and we will know fully (1 Corinthians 13:12). Right now, however, I have more questions than I have answers, but I refuse to let my questions compromise that Truth that God has implanted in my heart. We have just a small window of opportunity to give God something now that we will never have the opportunity to give in Heaven: worship in the middle of pain, in the middle of questions, through loss, through not knowing, and through lack. So, that’s what we’re doing, praying that our worship rises before God as something sweet, even though in the moment it feels so bitter.